send-letter-t05.php v01 - 2018-11-25 11:10 AM
yes
archive.downsizedc.org
/defend-citizens-united/
https://archive.downsizedc.org/defend-citizens-united/
yes
no
yes
489393
I believe Citizens United should be preserved and defended
It's time to tell the truth about the Citizens United decision. The case wasn't about corporate contributions to candidates. They still cannot legally take this money into their campaigns. Citizens United was about a movie that was banned from broadcast. A non-profit corporation -- an advocacy group -- wasn't permitted to spend funds on a critical documentary about a presidential candidate. In other words, information was withheld from voters. Citizens United gave grassroots organizations the same freedom to spread information that the mainstream media enjoys. That's a good thing, not a bad thing. I want incumbents challenged. I want third parties to expand. I want the voters to get more information, not less. I want more First Amendment liberties, not less. Citizens United has delivered all of these results. Therefore, I want you to support Citizens United and to overturn laws that restrict First Amendment political expression.
/var/www/archive.downsizedc.org/wordpress
Your Representative, Your Two Senators
no
no
8651
letter05.php v03 2019-08-12 8:33 AM

You should support Citizens United because incumbents hate it

Citizens United is the subject of routine lies.

The Citizens United decision is good news for the grassroots but bad news for entrenched incumbents and the media. It helps level the playing field. Citizens United made competition easier for challengers, and also freed them from having to rely on the good graces of the mainstream media.

The entrenched interests, who would benefit by overturning it, don’t want you to know the following fact… 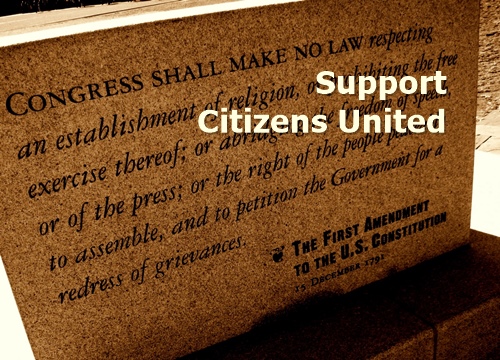 Citizens United did NOT give political campaigns access to unlimited corporate contributions.

What Citizens United actually did was permit a non-profit, grassroots corporation to broadcast a movie about a presidential candidate. Before Citizens United, spending money to either broadcast or promote information about a candidate was illegal, unless you were a member of the privileged mainstream media. In this case, you couldn’t see the movie.

The Citizens United critics usually use the word “corporation” with a sneer. But corporations include entities like…

Thanks to Citizens United, these enterprises can publish or broadcast information about issues or a candidate’s voting record. They can even say vote for or against. But (and this is important) they cannot directly coordinate with the campaign itself.

Plus, this expansion of political outreach benefits the underheard side. Widespread broadcast of information helps challengers far more than incumbents and frontrunners. Plus…

We explained the “Secret to defeating an incumbent” in a 2013 article: Basically, you must have enough money to force the incumbent to open his warchest. And Citizens United creates a method to make the incumbent expend funds defending his record.

Your incumbent should know you are not fooled by the deceptive information spread around by the critics of Citizens United. Tell them you’re not fooled, now…

Sending Letters from this page is suspended

Please email feedback@downsizedc.org if you would like this page reinstated.
If you do not want to wait for our maintenance to be completed you may use the following suggested Subject and Text and follow a procedure below.
Suggested
Suggested Text:

Procedure to send an email to your Representative

Procedure to send an email to a Senator

Procedure to send an email to the President