Will AOC embrace Citizens United now that she benefits from it?

Once upon a time, a group called Citizens United wanted to both broadcast a film and run ads promoting it. Their movie was about Hillary Clinton. Hillary Clinton was a candidate for President. 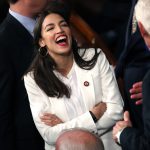 The FEC ruled that ads about and broadcast of the film would be illegal under the then-existing campaign finance laws. Citizen’s United challenged that restriction in court. DownsizeDC.org, Inc (which runs this website) and Downsize DC Foundation filed an amicus curiae brief in that case. We argued that all groups of citizens, including corporations like Citizens United and Downsize DC, have freedom of the PRESS that the campaign finances laws were violating.

The Supreme Court agreed. The result was the landmark Citizens United decision.

Send Congress a letter telling them so. Use our letter below, or put it in your own words.

Sending Letters from this page is suspended

Please email feedback@downsizedc.org if you would like this page reinstated.
If you do not want to wait for our maintenance to be completed you may use the following suggested Subject and Text and follow a procedure below.
Suggested
Suggested Text:

Procedure to send an email to your Representative

Procedure to send an email to a Senator

Procedure to send an email to the President